Love, Sex and other Waves 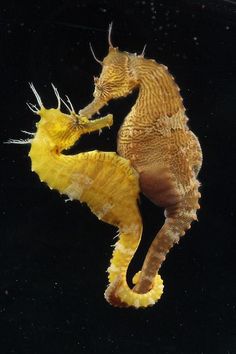 It is that time of the year that we celebrate love. Although underwater is a constant celebration.

While we celebrate the month of love with the so-called most romantic date of the year - that is Valentine´s Day; while for us human earthlings it is months of roses and champagne; other type of bubbles are happening underwater.

Some of these mating habits are quite peculiar, some of these species choose a partner for life. Let´s have a look at the most fascinating seductive and mating rituals underwater.

1. The dedication of a True Romantic: The Power puff fish

The male power puff fish is as devoted as it gets: using its fins it creates one of the finest art pieces to attract the female.  During a week and 24 hours a day, builds underwater crop circles on the sandy floor of the ocean, without resting to prevent the changing current to destroy his work.  The female then, attracted by this ephemeral underwater mandala, will mate with the male powerpuff fish. Afterwards, the female will lay the eggs in the centre of the circle. Quite romantic, indeed!

2. The master of disguise or why the nerd guy always gets the girl

In love and war all is fair. The beta cuttlefish lives by this belief. His chances as a smaller beta male to engage into mating with a female are subdued to the presence of domineering males. Now our friend, using his camouflage abilities, in the presence of a larger male and a group of females, will transvestite as a female. In this fashion, on the side facing the alpha male, the beta male looks as female. But on the other side, the one facing the group of females he looks like a male. This way the beta male buys time to convince the female into mating, and once they are mating while keeping its disguise…the alpha male will think this is just two females hanging out, when truth is that it is a beta male making babies with a female. Fantastic.

To say that seahorses are quite strange at so many levels is a complete understatement.  To begin with the alien look of these animals, their size but foremost their mating ritual and reproduction.  They dance while mating, in a choreography that can last up to eight hours. Their tails entangled, swimming and changing colours facilitates the pregnancy, in this case of the male.  It is the male that would give birth later on to the seahorse offspring, defying the patriarchal laws.

All I need is a rhythm divine, viva la música say you´ll be mine.

4. Co-dependency in the depths of the Ocean

Without you I am nothing, or that at least is the case for the male anglerfish. This abyssal bony creature, known for its fleshy growth from the head that with its light acts as a lure. But when it comes to mating behaviour it is known its sexual dimorphism and sexual symbiosis. The much smaller male does not have a digestive system, hence when the male is born it needs to find a female to attach to in order to survive. Move in together rather fast. The male, in exchange, will supply the female with sperm. Until his very own death, when the female will use his appendage to fertilize the eggs. It is a mix of parasitism and survival economy. Horrific, gross and somewhat romantic. And we thought getting a matching tattoo was commitment. See that little white thingy with a black eye? That is the anglerfish male. Hang on buddy, for dear life. Picture by www.kevkurtz.com

These are some of the strangest and most peculiar mating habits and love rituals under water. Long live love!