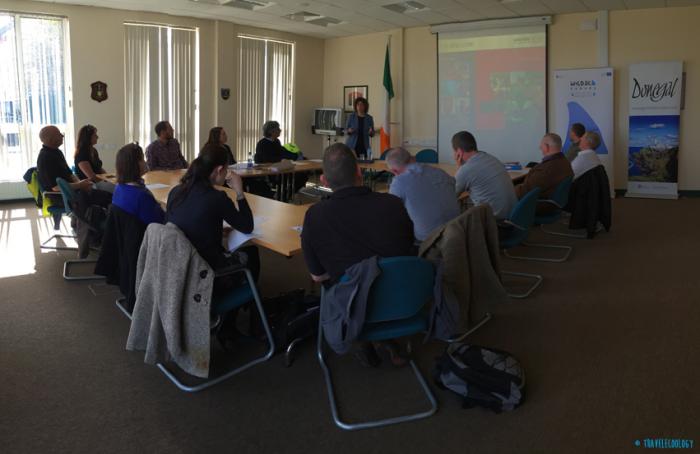 While you make us happy navigating through Wildsea.eu and discovering and sharing its contents, we continue to pursue project Wildsea Europe’s mission: fostering nature tourism in coastal destinations across Europe. During the month of May, Wildsea Europe’s team is meeting with the Route’s members and stakeholders in Catalonia, Causeway Coast & Glens, Donegal, Istria and Portofino to exchange experiences and ideas to advance best practices in marine wildlife tourism and to create a sound scenario for its sustainable development in the Route’s partner destinations.

Last week we had the pleasure to travel to Ireland to engage with tourism operators and environmental institutions from Causeway Coast & Glens (Northern Ireland) and Donegal (Republic of Ireland). What follows is a short briefing on the content of the meetings that were held, as we seek to keep you updated with the developments and current events of Project Wildsea Europe.

Causeway Coast & Glens Heritage Trust hosted the first of this series of meetings in Ballycastle. Participants had the opportunity to learn about the challenging work being undertaken by the Marine Division of the Department of Environment of Northern Ireland to advance knowledge of the marine environment, plan a sustainable use of its space and resources and control the impact of tourism activities through licensing and regulation. Special attention was given to the island of Rathlin - a hotspot for much celebrated species of sea birds (such as the common puffin) and marine mammals (such as the grey seal). Wildsea Europe’s partners SUBMON, Turmares and Travelecoology met with local tourism operators and reflected on the opportunities and challenges of promoting marine wildlife tourism in coastal destinations and of building effective connections between tourism and marine biodiversity monitoring programs. The Centre for Environmental Data (CEDAR) introduced its data collection programs, which offer a great platform for those tourism operators along Causeway Coast wishing to facilitate citizen science activities.

Donegal County Council hosted a second meeting in Donegal, bringing together some of the community leaders in wildlife tourism of the region. Conservation Ranger Emmett Johnston from the National Parks & Wildlife Service gave us an introduction to the great natural values of the peninsula of Inishowen, a unique coastline where sea birds, seals, cetaceans and large fish thrive conspicuously and at sight for the pleasure of visitors. He addressed the opportunity that the presence of important flag species such as the basking shark represents for tourism development in Donegal, and the responsibility that is coupled to such a unique privilege. Local operators such as WAW Climbing, Wild Atlantic Way Adventures, Malin Head Tours and Malin Mara Surveys, amongst others, engaged with team members of SUBMON, Turmares and Travelecoology to advance a “best practice” manual that will be used as a reference across Wildsea Europe destinations to promote consistent, sound wildlife tourism practices amongst the Route’s member operators.

Participants further took part in a field visit to Inishtrahull Island, a wildlife paradise off the coast of Malin Head where the history and the stories of endurance of the human communities that inhabited the island up to the early 20th century intertwine with its beautiful landscape and the lively sounds of its current inhabitants: eiders, fulmars, skuas, black guillemots, lesser black-backed gulls oyster-catchers and grey seals saluted us along the way, while a minke whale feeding off the coast happily flashed its fin as it swam in the ocean. The island is a relevant highlight within the wildlife tourism circuit developing in Donegal.

These meetings are a first step towards webbing a fruitful collaboration network amongst tourism operators throughout coastal Europe, in support of a more visible and competitive nature tourism sector. We are looking forward to further advance these efforts through the upcoming meetings planned in Catalonia on Thursday and Friday this week!