Surf the cold away at El Palmar 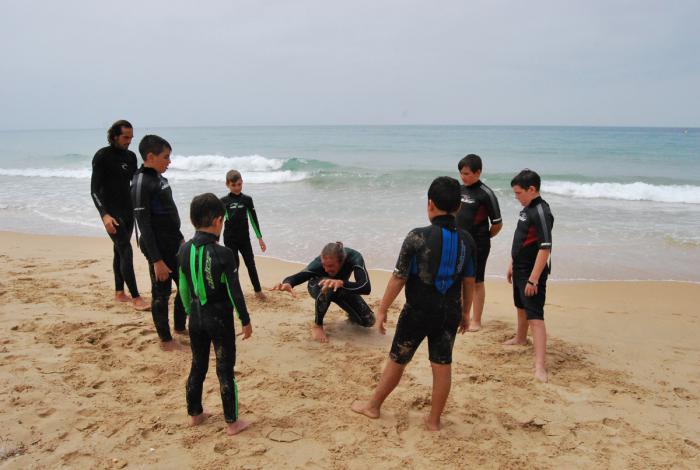 Dazzled by the Christmas lights, it is easy to forget that dreary winter is here for at least a couple more months.  However with these grey skies upon us we are snapped back into reality rather fast, while we try to hide in layers of clothes. A healthy exercise for the soul, and the spirit is enjoying a bit of sun kissed reverie. The remembrance of sea salt on your hair, the palm trees, the Beach Boys as a soundtrack, riding everlasting waves of joy.

El Palmar is indeed the surf capital of Andalusia. It is a small town of roughly 900 inhabitants, in the county of Vejer de la Frontera, in the province of Cadiz. Cadiz is well known for its long beaches of white sand facing the Atlantic. Cabo San Vicente, the last cape on the southern Portuguese coast, brings a shadow swell to these beaches. And when the change of season happens, waves do arrive to the 4.2km beach of El Palmar and some other surf spots along the coast. From el Palmar, to Barbate and all the way to Tarifa, the windsurf mecca due to the fact that both eastern and western winds meet. And a growing whale watching mecca too, a the union of the Atlantic Ocean and the Mediterranean Sea in the Strait of Gibraltar gives wings to a privileged marine environment, home to an exceptional diversity of cetaceans.

El Palmar is a phenomenal surf spot that suffers every now and then from heavy east winds. When the heavy eastern winds hit, it is better to head to the beaches of Roche, which are sheltered from the wind. But other than that, it offers an almost regular swell, left and right plus 3000 days of sun. An empty peak during the weekdays (pretty crowded over the weekends though) and last but not least: the good season starts in December, all through the winter months.

So stop the reverie…Surf is Up, Down South!

It's my pleasure to find this amazing website who provides mostly unseen information.

Awesome! Learned alot thanks so much keep posting more. homeremodelingtylertx.com

Why go to Hawaii when there is Andalusia, I would say. But nothing could be compared to the waves of Hawaii to be honest. yang, https://www.electriciannorthshoreauckland.info/

I need this one fence companies near me

Thanks for the informative and helpful post, obviously in your blog everything is good.. Testogen

Thanks for sharing this information. Excavation fresno ca

Great blog !! You should start many more. I love all the info provided. I will stay tuned.

I really appreciated this kind of site that I had been visited, having beautiful post of the blog with best info update that looks impressive. divorce lawyers melbourne

That's so wonderful time when being in the sea. The surf is amazing fireboy and watergirl adventure.

Subscribe & connect
Join Wildsea.eu and start exploring the seas!
10 Top Places in Europe for Whale & Dolphin Watching
Top Ten 1-Week Holidays in Europe
Letter from the Ocean
Safety first!
Best Atlantic Surf Spots in Europe
charli: printe
tamerakeel: No doubt the each and every segment of this part i
tamerakeel: According to 04/11/2022 - 11:33
biwonoy522: Awesome dispatch! I am indeed getting apt to over
cokima2891: wow this saintly however ,I love your enter plus n
Travel resources