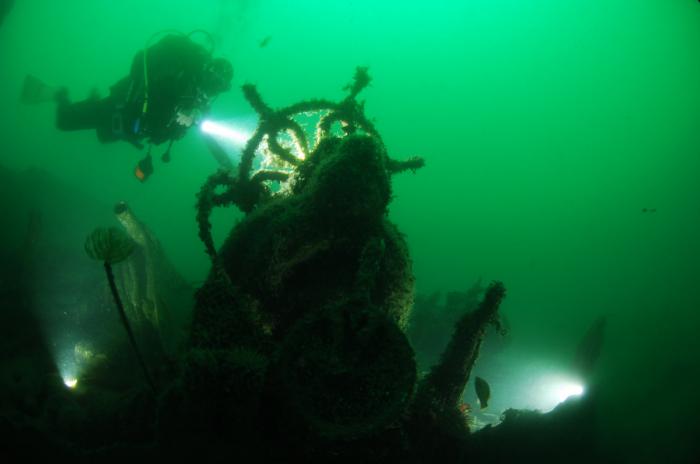 The WILDSEA Atlantic Ocean Heritage Route (WAOH! Route) is a discovery journey along some of the best diving destinations in Europe’s Atlantic coastline. Along this notorious rugged, wild coastline, there is a feast of shipwrecks and archaeological remains to entice anyone interesting in wreck diving in Europe - nothing quite beats the feeling of history coming alive before your eyes, under water. There is also a wealth of underwater landscapes – reefs, caves and rugged mountains, amazing kelp forests, corals, gorgonians and a world of marine invertebrates that makes each diving experience unique.

We've selected some of the best wreck dives along the WAOH Route's destinations for you. Here we go! 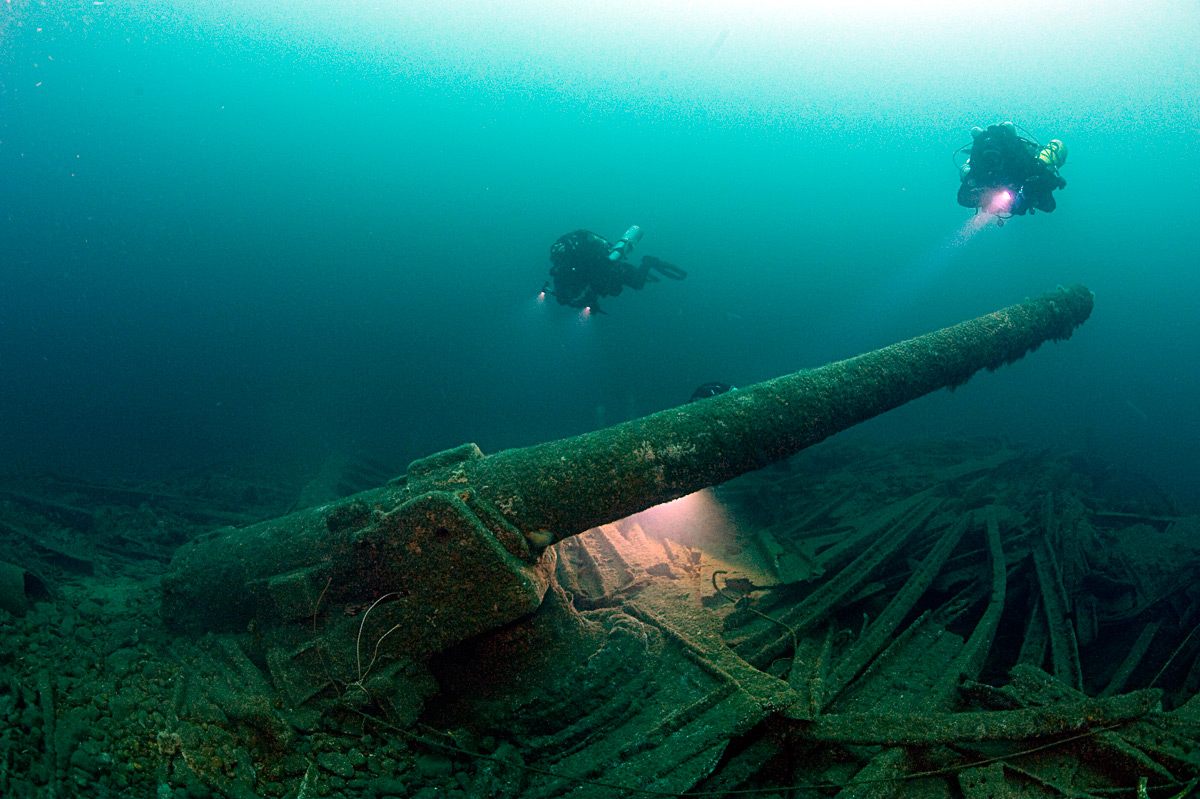 Deep sea wreck diving in Donegal is simply world-class. The seabed off the Donegal coast is primarily rock and shale, which provides excellent visibility – up to 40m – and there’s a plethora of wrecks from U-boats and Sherman tanks to battleships and fishing vessels. One of the most popular wreck dives is the SS Laurentic, which lies in one of three glacial fjords in Ireland. Built to be one of the White Star Line liners, it was wrecked during World War I while carrying £5 million worth of gold bullion to repay British war debts. It took seven years to salvage the gold and to this day the amount recovered is the most ever taken off of a wreck. At a depth of 42m, SS Laurentic is accessible for both leisure and technical divers.

Many of the other popular wrecks in North Donegal (the northernmost point of the WAOH Route) are deeper than 60m and so are for experienced, technical divers. The SS Empire Heritage sank off Donegal’s Fanad Peninsula with a cargo of Sherman tanks and is commonly known as "the tank graveyard". It’s at a depth of 66m of depth and is regarded as one of Europe’s best dives sites. Ireland’s most northerly point, Malin Head (known to many as one of the locations included on the Shipping Forecast), has witnessed some important dates in history, from the site of Ireland’s first telecommunication (Lloyds Signal Tower), to the German Fleet passing as the end of the first World War. Off the coast of Malin Head lies the HMS Audacious, a 23,000-ton battleship that lies at a depth of 64 metres, so trimix is required to dive it. A slack water dive, the area generally offers fantastic visibility. WILDSEA Europe's members run diving trips to all the ‘Donegal Classics’ and Malin wreck sites (including drift dives), including HMS Audacious (64m), SS Cathaginian (58m), SS Empire Heritage (66m), RMS Justicia (72m), SS Laurentic (42m), SS Athenia (60m) and two U-Boats – U-2511 (67m) and U-89 (62m). Its dive instructors have expert knowledge of all the wreck locations and its weekend trips are for all levels of qualified divers.

Drop us a line if you wish to find out more about shipwreck diving in Donegal. 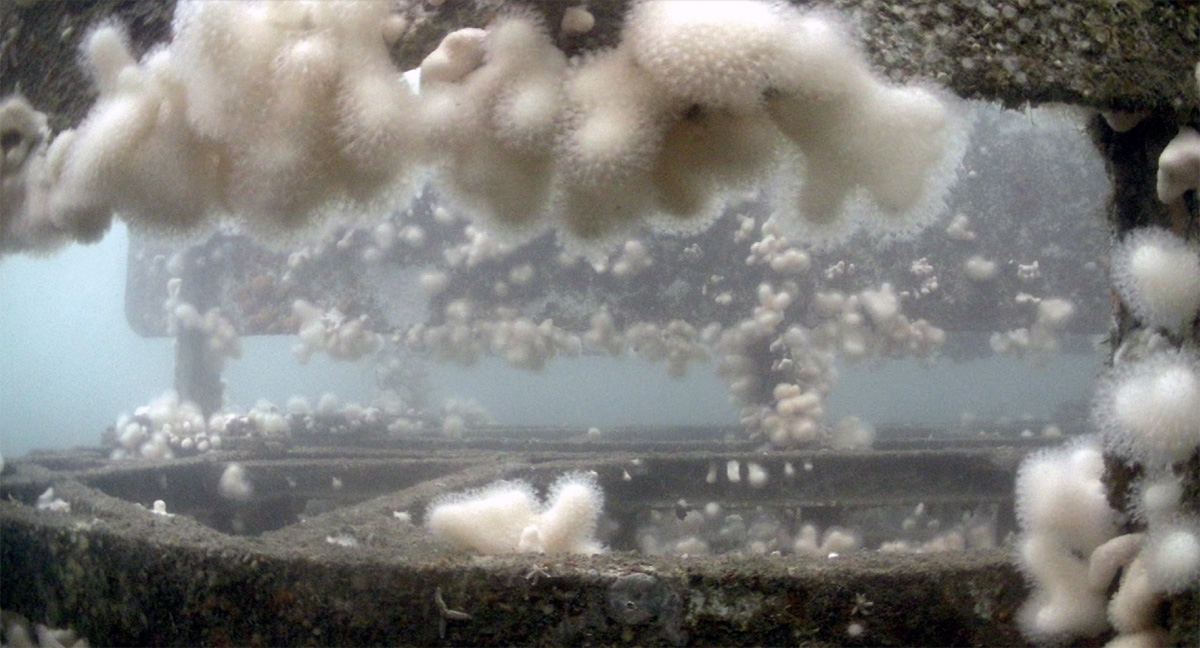 As you head south down the WAOH Route, Cornwall is one of UK’s best hidden natural treasures. The surrounding sea is warmed by the Gulf Stream so Cornwall's marine population is quite distinct from what you'll find elsewhere on the British coast, and because its underwater pinnacle and reef systems have presented a formidable danger to passing marine vessels, there are numerous shipwrecks. Don’t miss the wonderful Shipwreck & Heritage Centre at Charlestown, home to the largest private collection of shipwreck artefacts in Europe. The collection houses over 8,000 finds gathered from over 150 shipwrecks found in seas, rivers and oceans throughout the world. Artefacts range in date from Ancient Egypt and Roman Period to the modern day.

There are several wonderful wreck dives off the coast of Cornwall. At the infamous Mannacles Reef off the Lizard peninsula, the SS Mohegan ran aground and sank in 1898 with the loss of its 106 crew. The 146m-long site, which requires at least three dives to cover it, features rock stacks covered in jewelled anemones and is home to dogfish and anglerfish. WILDSEA Europe's member Atlantic Scuba runs dive trips from Mylor Yacht Harbour to the Manacles, including visiting the SS Mohegan and the WWI Steam Ship, the Volnay. It also provides the opportunity to take part in citizen science activities during the dive in support of marine wildlife.

Off the western coast of Cornwall off St Ives lies the St Chamond at a depth of 30m. The wreck has been flattened over the years, but there is still evidence of its cargo - six steam locomotives. The outer casings of the boilers and the cabin have all but eroded away, leaving the iron tubes and pipes but the running gear and chassis of the locomotives are easily recognisable.

A more recent wreck is HMS Scylla - a Leander class frigate – which was sunk off the south coast of Cornwall in 2004 by the National Marine Aquarium in Whitsand Bay to create an artificial reef with wreck divers in mind. It lies upright at a depth of 24m, with the bridge area in less than half that depth. It was rapidly colonized and is now home to around 270 marine species - dead mans fingers and plumose anemones decorate the hull, while shoals of fish and even squid circle around the top deck. Thanks to the proximity to the wreck of the James Egan Layne just a few hundred metres away, and the minimal tidal movement, these sites are two of the most popular wreck dives in the UK. Check our site for more information about the WAOH Route in Cornwall. 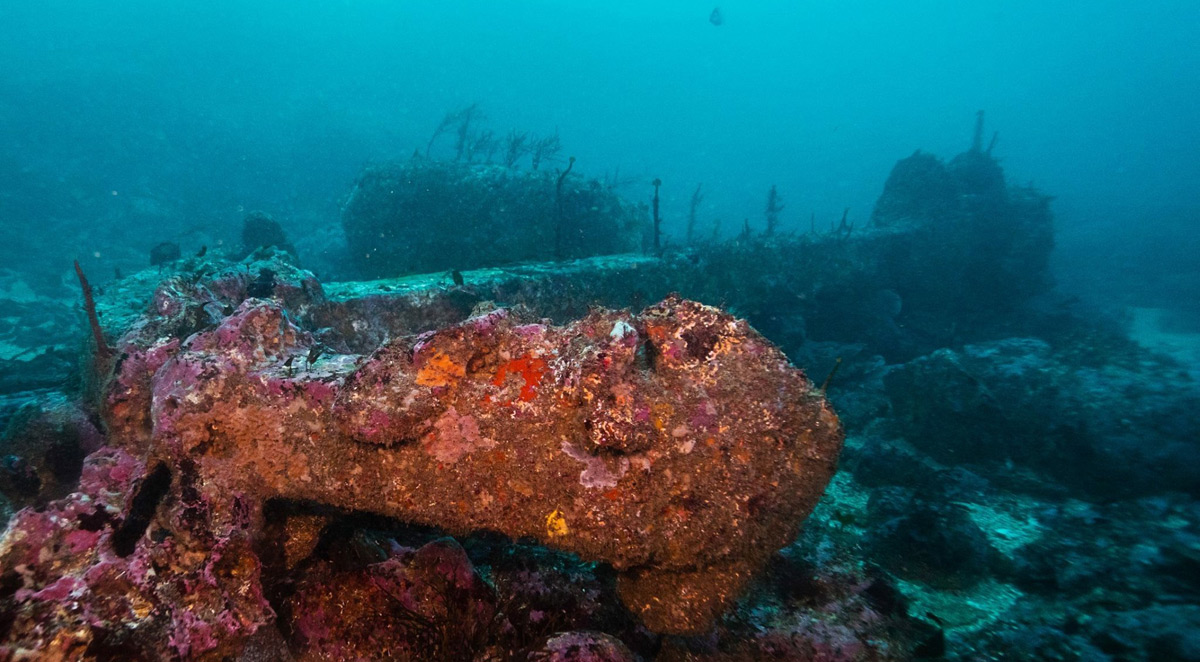 The WAOH! Route enters Spain through Galicia - a beautiful Atlantic coastal region whose rich natural and maritime heritage attracts scuba divers to its waters all year round. Galicia has its own language and a distinctive culture and there’s plenty to do while you’re not diving. Santiago de Compostela ‒ its capital‒ is famous for being the final destination of the "Sant James Way" pilgrimage trail. Galicia is also famous for its food, including polbo á feira, literally meaning "fair-style octopus", and keep an eye out for the hundreds of troughs ("bateas" in Galician) on the estuaries – structures that are used for the farming of bivalves.

The most popular wreck dives are in fairly shallow waters so are accessible to leisure divers.  The merchant ship Aries, which sank during a storm in 1977, rests on a sandy bottom at a depth ranging from 21m to 50m in Ria de Arousa and is in excellent condition. The entire structure is virtually intact, and the boat still rests on its keel in the upright position. Divers can enter the cabin and the toilets and see the old tub and cabin compartments and bridge. Medusa Diving Centre runs a 2-hour dive trips suitable for all levels of divers to Aries.

Among the islands scattered off the Costa da Morte (its name literally means "Coast of Death" as this strip of treacherous coast has caused numerous shipwrecks over the years) lies the British steamer Priam, which sunk in 1989. Its remains (at just 16m) can only be reached by boat. Nearby is the well-preserved 19th Century steam vessel Solway (sank in 1843) at 27m depth, which has only recently been discovered 5 miles off the coast of Malpica. The shipwreck had important consequences for shipping off this coast as it led to the construction of new lighthouses to improve the visibility for ships approaching Costa da Morte. Buceo Malpica runs 3-hour dive trips to the Solway guided by one of the experienced divers that were involved in its recent discovery.

A little further up the coast lies the tanker Aegean Sea, which sank in 1992 near the UNESCO "Tower of Hercules " – the only Roman lighthouse in the world that is still functioning. This iconic wreck (which lies near spectacular underwater cliffs ranging from a depth of 8 to 40 metres) now offers shelter to bream, large bass, octopus, cuttlefish, lobsters, crabs, eels and rays. Nauga runs dive trips to the Aegean Sea for all levels of certified divers where you will observe some of the well conserved parts of the vessel, such as its engine, boilers and the hold.

Wreck diving in Cascais and Sesimbra 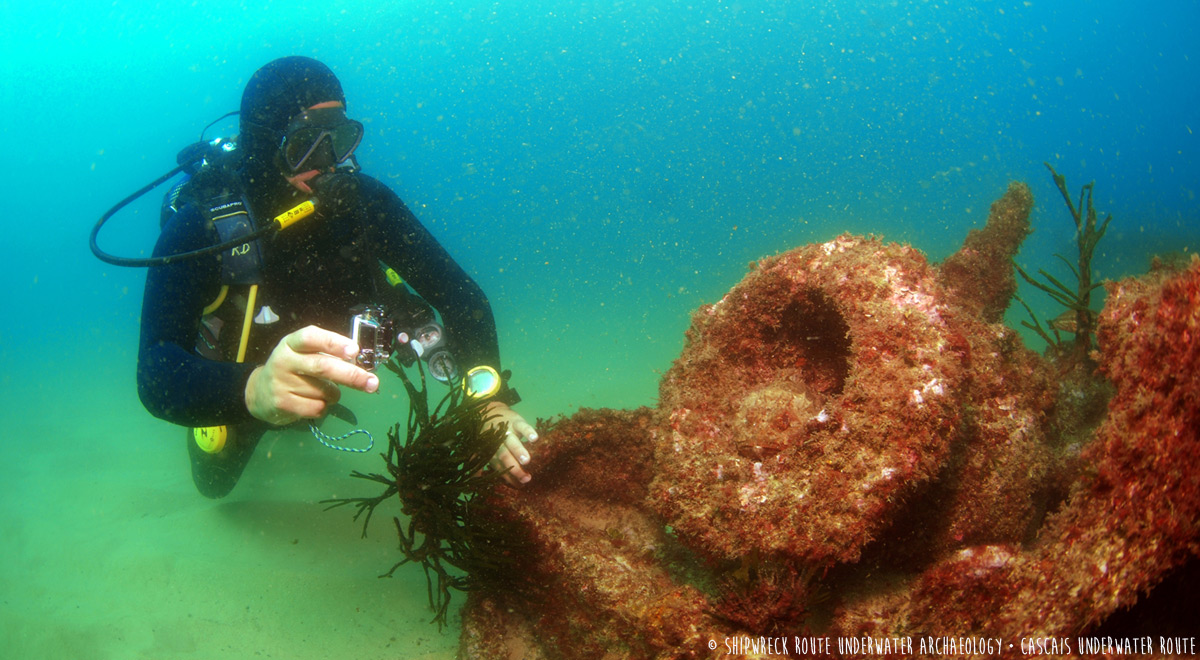 Heading down into Portugal, the WAOH Route continues to Cascais, a beautiful coastline that’s flanked on two sides by the Atlantic Ocean and is known as the Portuguese Riviera. Here lies the SS Hildebrand - an English mixed cargo and passenger ship that sank in 1957 in front of the Fort of São Jorge de Oitavos due to a navigation error on a night of calm and dense fog. The force of the sea quickly shattered it spreading its wreckage throughout the zone. Today, diving in the Hildebrand is at low depth where the sea is usually very beaten, but there are two structural parts of the ship separated by about 80 metres that allow to identify the wreck, containing parts of the hull, bulkheads, caves and some hatches. The inner structural parts create natural shelters for marine organisms such as fish and crustaceans.

Further south, passing Lisbon, the WAOH! Route reaches Sesimbra, a beautiful fishing village that has grown to be known as "the diving capital" of Portugal. The warm waters and geographical situation makes it possible to dive almost all year around, offering perfect conditions for all levels of certified divers. The most popular wreck dive in Sesimbra is The River Gurara - a 170m long Nigerian cargo ship, which sunk 1 mile off Cabo Espichel in February 1989 during a storm. The ship broke into two sections as it sank, so there are two distinctive dive locations at different depths: the stern lies at 25m and bow at 30m. Sesimbra is also home to Arrabida Natural Park ‒ the biggest Portuguese marine reserve. Portugal Dive runs dive trips to Arrabida where there’s abundant marine biodiversity, beautiful beaches, clear waters and gorgeous cliffs. 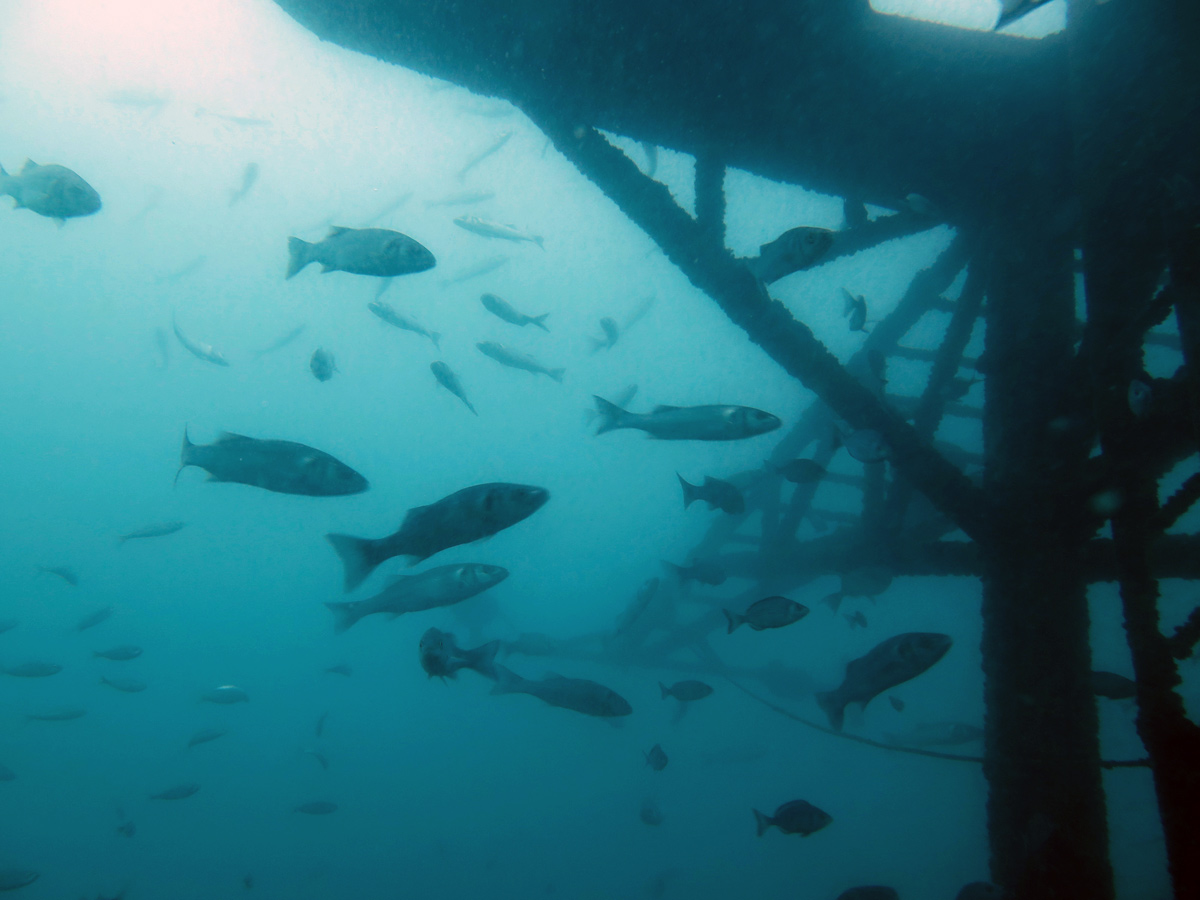 The far southern tip of the WAOH Route is at sun-drenched port city of Portimão that’s a bridge between the Atlantic Ocean and the Mediterranean. Experienced scuba divers can explore the Ocean Revival Park, where four decommissioned warships have been placed to form the largest single artificial reef structure in the World. The warm waters off Portimão are ideal conditions for the proliferation of marine life so there’s an authentic and freely accessible underwater theme park for divers. The park is safely adapted to suit all levels of difficulty and enjoys good sea conditions most of the year. Check out our website for more information about the WAOH Route in Portimão.

If you wish to explore any ship wreck along the WAOH! Route, drop us a line and we will set you up for your next diving adventure!